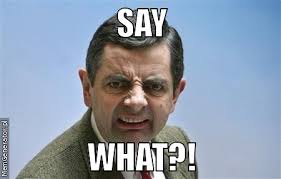 You know we always say that if a baby does a ‘wee-wee’ in his/her pampers, it is the norm, it is expected of the baby. But if 15years down the line, that same child is still doing a ‘wee-wee’, then there is a problem!

The same is applicable even in every other sphere of our lives, there are certain types of ignorance that are pardonable for a particular time, but as time goes on, ignorance cannot be an excuse.

Okay, let me share a story. When I was in JSS1 [Junior high school], I was bitten by the ‘belong bug’. So my birthday is in October, but back then, there were two of my classmates that had the same birthday; it was just so ‘awesome’ to see two people share the same birthday [it was a fascinating feel for me then]. So do you know what this girl [me] did? I wanted to bask in the euphoria of that ‘feel’ and I said that I was born on the same day as the girls then. So here is the thing- my birthday always came before theirs, theirs was in November. So I never acknowledge my ‘real’ birthday; I waited almost 4weeks for the birthday of the girls. Yup! I’m sure you are wondering: ‘what of your parents?’ didn’t they ever celebrate you on your ‘real’ birthday? Well! I guess my secret was safe, as I went to a strict boarding school, and my younger brother was still in primary school at that time. No one could blow my cover. Lol

I do not have an idea of how I got to acknowledge my real birthday, and how my classmates were able to accept my ‘real’ birthday as the one and only date that is indeed accurate. But I sure got some ‘vaccines’ for the ‘belong bug’.

I can look back now and laugh at myself. How could I be so silly? and all sorts. But you want to know the truth- That was a L-I-E! I can say it was just me messing about or being a child. Yes I could be right, but that was in ignorance; I did not know better.

Fast forward to this day, I cannot say to you, that I never told a lie two weeks ago; that will be another lie in itself again. For the past two years, I’ve come to the point where I say to God: ‘take away my lying lips and give me a truthful tongue’. I won’t sugarcoat it. It was hard wearing the truthful tongue, most especially because I was striving to do this in my strength and consciousness. But really, when you come to think of keeping tabs of your tongue, how can you keep up? I know we have the ‘necessary lies’, ‘getaway lies’, ‘white lies’, ‘black lies’, ‘little lies’, ‘big lies’ and so on. [Shaking my head at this point]. All these are just traps in form of titles.

You see, John 8:44 says ‘….when he[devil] lies, he speaks his native language, for he is a liar and the father of lies‘. I can’t say I belong to God and then keeping ‘getting in and out’ of the devil’s covering. There is no oxymoron when it comes to our lives being a living sacrifice to God. Referring to the title of this post: there’s nothing like a ‘holy liar’. Revelations 3:16 says ‘So because you are lukewarm-neither hot or cold- I’m about to spit you out of my mouth’ So in my understanding, if everytime it is convenient to tell a lie, I indulge, and I say ‘Oh! it was necessary’, then there will come a time when lies will be truth even when it is so obvious that it is a lie. It’s inevitable. 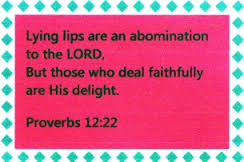 You know what I found out as well, ‘telling lies’ is an abomination to God [Proverbs 6:17], he does not just hate it, he abhores it. Personally, I believe that ‘abomination’ is a very strong word compared to ‘hate’. It wasn’t just mentioned in Proverbs 6:17, Proverbs 12:22 says that ‘Lying lips are an abomination to Jehovah. But they that deal truly are his delight‘.

The thing I’ve come to understand about the Word of God is that when something is reiterated over and over, it sure means a lot to God. Don’t get me wrong, every word of God means a lot to him, and should mean a lot to us as well. But when repitition is involved, that’s another level for me.

So if I profess that ‘God I want to be holy like you’, ‘I want to please you, I want to behold your glory’, then I must consciously and with the help of the Spirit of God work towards not going down the ‘abomination’ route. God is a holy God, we cannot keep professing that we love him and want to be with him and still mortgage our instrument of life and death to the devil, by telling lies.

The thing with telling lies is that, it graduates to blasphemy. Blasphemy in the sense that lies become truth like I said earlier. The devil is not joking. There are some things like ‘I thought……’, when actually I didn’t actually think that; but saying I thought makes you get off lightly, doesn’t it?

My beloved, ain’t there nothing like small lies, necessary lies, little lies and all sorts. It is an abomination. It is on the same platform with murder. Let us not get attuned to the trap that is being set, with the thinking that telling a lie is nothing compared to killing. BLATANT LIE! You remember what got Ananias and Sapphira dead in Acts 5:1-11? Lies! amongst other things. From ‘little lie’ to friends, it goes up to telling lies to the Holy Spirit.

You may be saying, this is difficult. True! if it is by man’s capability, but with the help of the Holy Spirit, our tongues can be tamed to truth. Why do I believe so? I believe we can have truthful lips because if God has said something is abominable, he has released strength/grace to do the inabominable as well-telling the truth.

Personally, I was at a point where I was pressed to tell lies for my boss at work. It was a struggle. I found myself, telling the lies and saying to God: ‘please forgive me, you know it’s not my fault’. And the Spirit of God ministered to me, and now I find myself asking the Holy Spirit to give me the right words to say, which will relay the message without telling lies in the process. Trust me, God has been faithful. He has been helping me. All things are possible to those who believe-Mark 9:23. Ask, believe and he will do it!

So enlighten me, how has the Holy Spirit been helping you with the ‘holy liar’ struggle?

Have a wonderful week!

3 thoughts on “Holy Liar- You say what?”